This film brought together three elements that together brought off a number of b-grade coups during the disco dancing 80’s. Firstly there is producer-financer B. Subaash and what were to become his dynamic duo of mujik (music) composer Bappi Lahiri and dancing black belt superstar Mithun Chakraborty. The film is a bombastic desi version of James Bond on a shoestring budget. What it lacks in hi-tech big budget wizardry it more than makes up for with its abundance of maniacal energy, self effacing wit and cheesy style.

The film begins on a high with the fabulous theme song ‘Gunmaster G-9’ being accompanied by frenzied scenes of super hunk Agent Gunmaster G-9 (Mithun) being swamped by a bevy of scantily clad beauties wherever he happens to go, anywhere in the city, day or night. If anything our G-9 is even more of a swinging playboy than James Bond was in his wild wanton Connery days of the pre safe-sex era. However his frolics with the girls are soon to come to a shuddering end as Iftikhar playing a worthy M clone, calls up G-9 with dire news of a dreadfully dangerous new underworld organization that is threatening to destroy the country from within.

First signs of trouble occur when a jet plane manned by Capt Suresh Oberoi is attacked by a stream of deadly radio active signals (an SSO signature) forcing it to make a crash landing in the middle of nowhere. Its all part of the nefarious plot cooked up by the dreaded Shiv Shakti Organization that is threatening to wreak absolute havoc in the very near future. G-9’s partner Jackson is abducted by the SSO heavies and an insidious replicant takes his place that doesn’t fool the canny G-9 for a moment.

In his mission to rescue his buddy Jackson and more importantly to crush the evil empire of the Shiv Shakti Organization and the dastardly team that comprise its high command, G-9 has to cope with all sorts of mayhem which he manages to side step with ridiculous ease, almost arrogance. However he has to call upon an array of mind boggling and gravity defying stunts in order to make much headway against the hardened criminals of the SSO organization.

Along the way to the breath-taking finale there are death defying car chases, dancing go-go girls, villains with calculators affixed to their metallic hands, voodoo rituals, murder, mayhem, kung-fu and the obligatory romance and light comedy courtesy of the amazingly prolific (and awful) Jagdeep.

Mithun sets the pace with a career defining performance in which he lives his role to perfection. He is charmingly boyish, yet suave and with a cool killer instinct, yet where he truly excels is in the fight scenes where his highly touted Black belt capabilities come to the fore.

Director Raveekant Nagaich, who did such a sterling job on Jadu Tona, goes for an audacious no-holes-barred approach with no compromise on the stream of spectacular stunts and dazzling special effects however threadbare the budget clearly was. To be fair Jagdeep is quite inoffensive as the Bond sidekick more in the mould of Sellar’s Pink Panther sidekick Kato. 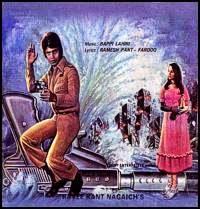 Ranjeeta provides some good cat fights along the way but is no match for Mithun’s charm. Jeevan is in top form as the second in command at the SSO turning in a vintage performance not long before his death. However the surprise package other than the majestic special effects is the spellbinding performance of the little known villain who plays the eye-patch wearing Dr. Shiva, a deranged megalomaniac and founding father of the world threatening SSO.

Mithun has his work cut out for him trying to steer clear of all the assorted horrors jumping out at him from all directions with perhaps the acrobatic, leaping water snakes being the most nightmarish foe of the lot. The film is quite possibly the biggest cult classic to emerge from Bollywood in the modern era – it has simply everything going for it. Right from the amazing theme song to the babes, the stupendous special effects, the dances and those stunts alone are enough to render this film a major cult classic to be reckoned with.

For the Love of Cinema!
Contact us: bhaktividenta@gmail.com
© Copyright - The HotSpot Cafe | Designed by CreativeLoog.co
MORE STORIES