Lollywood’s forays into the realm of horror have been few and far between (unless you consider those Pashto monstrosities as the most terrifying brand of horror) and one has to go back years and years in order to be able to discover even one.

Jasoos from the early 80’s is a weird slasher/stalker thriller which employs horror techniques and was an enormously enjoyable if totally bewildering experience. While Jasoos was essentially a murder mystery, Zinda Laash is an out and out horror film – Lollywood’s own interpretation of Hammer’s classic Dracula with Rehan slipping into Christopher Lee’s role as the Zinda Laash of the title and doing a fine job.

The 60’s black and white production starts off with a clearly unstable mad scientist type (Professor Tabani) working profusely in his very Hammer-ish lab. Test-tubes bubble away furiously and while the distinguished professor pours himself a beaker of a very strange looking substance and proceeds to knock it back. The next morning an assistant finds the Professor’s corpse lying crumpled up and a note which explains what had caused it. 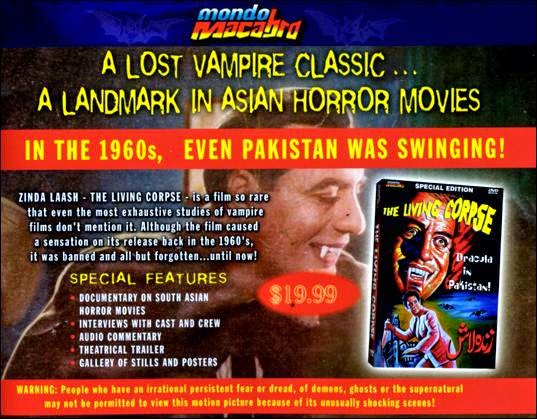 After the professor is buried, the potion starts to take effect and he is abruptly woken from the sleep of the dead and returns to the animate world as the Living Dead. Fortunately for him, he appears to have been buried in a coffin with a lid that opens very easily as he is out and about searching for victims within moments of reawakening. He finds his buxom accomplice (Nasreen aka Salma Agha’s mum) reclining and doesn’t waste much time in jabbing those fangs into her fragile neck and feasting on her blood.

First signs of trouble are when the doctor handles the strangers luggage as if it weighed but a grain of salt while carrying it upstairs to the guest room. Tabani catches a glimpse of the photograph of the visitors wife and takes an immediate liking to her neck lines.

That night, a mysterious beauty appears and begins to enchant the stranger with an intoxicating dance number. All cat like grace and voluptuous sensuality, she draws closer to the stranger and then bares her hideous fangs. There is a stand off as Tabani appears to feast on what he considers his rightful victim. The scene is a direct lift from Hammer’s film where Barbara Shelley is confronted by an irate Christopher Lee for attempting to partake of his dinner feast.

The wanderer is bitten by Tabani but manages to ward him off momentarily and return to the safety of his room. However the damage has been done and the stranger is destined to join the ranks of the undead. Eventually the strangers young accomplice , himself a Dr., goes on the hunt for his partner and it doesn’t take him long to find Tabani’s mansion and the beauty’s grave as well as the stranger. The young Dr. (Habib) returns to town to inform his trusted in-laws about the horrors he has witnessed and the two of them return to confront Tabani and destroy him. 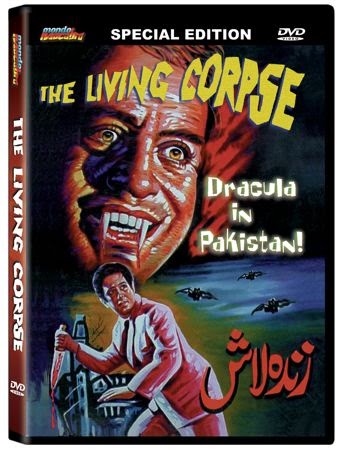 Yet the evil Professor Tabani has plans of his own and slowly he begins to spread his wings of terror upon an unsuspecting household. And where once there was frolic and laughter, now there is darkness and gloom. The best thing about it is that it isn’t padded out for hours with unnecessary songs and fight sequences. Also there isn’t much irritating comedy on evidence either. The film gets down to business from the very opening scene and doesn’t stray off course.

Rehan makes an imposing Dracula and does an impressive job living in the shadow of Christopher Lee. Deeba does well in a brief but memorable role as the young wife who is targeted by the “Khabees” undead. She has a great, almost Frankenstein like scene with a young niece upon whom she is planning to feast having already left the corpse of another child lying in the local graveyard, drained of every last drop of blood.

Another strong scene is where a the wife of one of our hero’s is called late at night and told that her husband has suffered an accident. She goes hurtling off in a taxi through a dark, stormy night while her husband returns home unhurt and unharmed having not suffered an accident of any sort. Then who is the maniac driving her to oblivion?The special effects are far from disastrous as could have been expected of a film so old, and that too a Lollywood creation. On the whole it’s a fairly commendable effort with far superior production values, and background music which suggests a marked deterioration in standards over the years.

Zinda Laash isn’t very frightening by modern standards – yet in its day it must have caused a few sleepless night or two. In fact the film was withdrawn after a week of exhibition after the government found it too “corruptive and evil” for the innocent audiences of the nation. The film was restored to cinema’s when the producers pleaded with authorities on the grounds that the western version of Dracula had played without any cuts and this version was milder if anything to Hammer’s version. The argument did the trick but the film had to carry an “A” certificate which meant that it was considered too strong for anyone other than adults over 21. The movie may not be a classic but compared to some of the dirge that is spewed up by Lollywood on a regular basis, it really is virtually a minor masterpiece. At least it can lay claim to being the best Horror film ever produced in Pakistan and also compares favourably with anything yet produced by the Ramsays, Bhakris or Talwars of Bollywood.

Zinda Laash is a worthy Lollywood interpretation of Bram Stokers classic, with an excellent performance by Rehan in the title role. Deeba’s too is memorable as she transforms from loveable playful nymph to a haunted, craving, blood-lusting creature of the night. Habib cuts a dashing figure and Asad does a fair job in the Harker role (from Nosferatu). Top marks also to the cameraman and those in charge of lighting who together have managed to come up with as visually effective a film as has been produced in Lollywood.

Though the music has been largely pilfered, its well incorporated other than the bit at the very climax which seems a touch OTT. The producers meanwhile remind patrons in the official program of the film to “remember it is a SCREEN ENTERPRISE terrible presentation”.

The movie opened on July 7th, 1967 to big crowds as curiosity levels had reached fever pitch as the film made history as the only local release to be awarded an “Adults Only” certificate. The clever advertising in the papers had filmgoers lining up to see why the film was deemed to be a threat to the fragile moral fibre of society! 35 years on,

Zinda Laash remains the only local film ever to have been certified “For Adults Only”.

For the Love of Cinema!
Contact us: bhaktividenta@gmail.com
© Copyright - The HotSpot Cafe | Designed by CreativeLoog.co
MORE STORIES